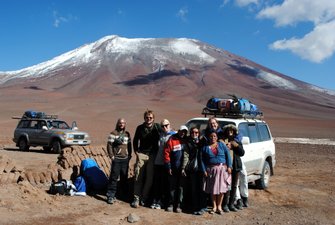 This page is dedicated to summarize what I personally think is interesting and useful when planning a trip to my country Bolivia.

Enriched by the Andean mountains, the Amazon rainforest and the Chaco dry forest Bolivia is the 28th-largest country in the world and one of the most bio-diverse. It ranks as the 7th in the world in bird species and the 4th in butterfly species.

Bolivia is almost as big as France and Spain together and is located in the middle of South America, reason why we like to describe it like the “Heart of South America”. We have a bit more than 10 million inhabitants that live in a democratic and mostly catholic country. Bolivia is one of the cheapest countries in the region and a convenient place to travel through and get to know our neighbours: Chile, Brazil, Peru, Argentina and Paraguay.

The most known place in Bolivia is La Paz city, the seat of the Executive and Legislative branches of our government and also the most important touristic place. The one and only capital of Bolivia is Sucre, where the Judicial branch is settled. Our official languages according to our newest constitution are 36, the most common ones are: Spanish, Quechua, Aymara and Guarani. Our currency is named “bolivianos” but we also use US dollars as currency, so if you buy something relatively expensive, you can either pay with US dollars or bolivianos.

What to expect about Bolivia?

You can expect a territory amazingly authentic and ethnic, where landscapes are often times surreal and the ways of living much different from the ones you might know. Likewise contradictions are all over.

We are a very rich country with an enormous amount of natural and cultural resources and at the same time notoriously poor, where more of 50% of the population lives under poor conditions.

We are a multicultural country. Maybe difficult for tourist to differentiate among our more than 30 different ethnic groups – with their own customs and languages – but we are not all the same. This makes our traditions, music, gastronomy and history very rich and interesting, including the mix of pre-Columbian and European cultures.

We have the highlands on the west side of the country with mountain peaks above 6.000 meters of high and the lowlands on the opposite side with a strong influence of the Amazon rainforest. In between we have valleys and dry forests. As you might expect, in the mountains the weather is mostly cold, in the lowlands is mostly hot and in the valleys the weather is mild. Our seasons are in practical terms only two: the dry season from November to April and the rainy season from May to October.

Before the Spanish came to America, Bolivia had well-established cities of the Inca Empire as well as many interesting cultures like the Tupi-Guaraní, the Moxeños, the Aymaras and the Urus, which fortunately can still be found! This is one of the biggest differences between Bolivia and our neighbour countries; we have mostly an indigenous population.

Getting there and moving around

To reach Bolivia from Europe, Asia and North America non-stop flights are practically non-existent. Most probably you will need to stop over in one of the South American’s international airports, like Sao Paulo (GRU), Buenos Aires (EZE) or Lima (LIM). The most important Airports in Bolivia are in correspondence with our three biggest cities: Santa Cruz (VVI), La Paz (LPB) and Cochabamba (CBB).

Many tourists prefer to come by land crossing one of our several frontiers, which is very convenient to reduce the price of your trip. Most common borders are:

Moving around Bolivia is already an adventure. Flights are quite expensive (comparing with bus transportation) and our road infrastructure inefficient with some exceptions. Usually you can find bus offers from several companies, which could be confusing for locals and foreigners. My recommendation in this case would be: don’t take the cheapest option and search for recommendations.

Passionate about challenging myself and discovering new things, I started to explore photography while travelling. Living abroad makes me miss my home country Bolivia and this is the reason why I like to share my insider stories and advice about travelling in Bolivia and information about our culture. View all posts by bolitravel